Drug delivery from an implantable medical device can be used for several purposes including:

For cardiovascular and some peripheral stents, anti-restenosis drugs are used to prevent tissue growth that can result from damage done to the vessel wall during implantation.  This tissue growth leads to a re-closing of the artery and often requires a follow-up procedure that is more complicated than the original one.   Drug eluting stents (DES) for coronary applications were introduced to the market in the early 2000’s as an alternative to bare metal stents and had an immediate positive effect on the problem of restenosis.

All of the early DES used polymer coatings to store and to control the release of the drugs.  However, a few years after they were introduced follow-up studies showed that some patients who received a DES died unexpectedly from blot clots (thrombosis) that formed on or near the stent.  It has now been documented that long term exposure of the vessel wall to the polymers coating is the most likely cause of these blood clots.   As a result of this finding, many companies and research organizations started working to come up with an alternative to polymer coating-based drug delivery.  Follow these links for a review of several different non-polymeric approaches: see Isoflux 2010 SVC Presentation and Manuscript.   However, all alternative approaches so far have significant drawbacks of their own.

Isoflux has developed an entirely new robust and polymer-free approach to deliver drugs from stents and other medical devices.  Our approach is to make use of the nanopores that exist within the flexible coatings we have developed.  We have demonstrated that the nanopores can be used to store and release drugs and other compounds without using polymers at all.  Previously Isoflux developed and patented nanoporous coatings to enhance the radiopacity of medical devices.  We can now use this same coating structure for drug delivery applications as well.

The Isoflux porous columnar coatings have a completely open and fully connected pore space.  Figure 1 shows the coating structure.  Because of the nanosize scale of the pores, the open porous network, and the fact that most solvents wet the surface of the columns that make up the coating (i.e., contact angle less than 90 degrees), solutions containing drugs immediately and completely infiltrate the pore space upon contact.  A simple dip coating process can be used to easily achieve a desired drug load that is controlled primarily by the drug concentration in the solution.  Or, a spray coating process can be used to achieve higher loads and can even be used to completely fill the pores with solid drug if desired. 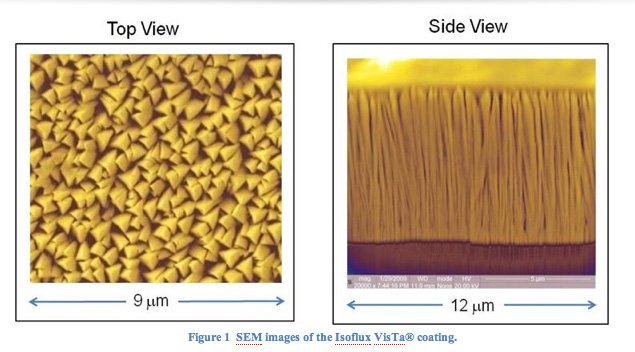 The total drug storage capacity of the coating is directly proportional to the coating thickness since the porosity does not change with thickness.  The porosity of the coating ranges from approximately 18 to 22% depending primarily on the material used.  Figure 2 shows the predicted drug load possible (filled pores) for tantalum and chromium porous columnar coatings on a typical coronary stent.  As can be seen, the drug delivery window is extremely wide. 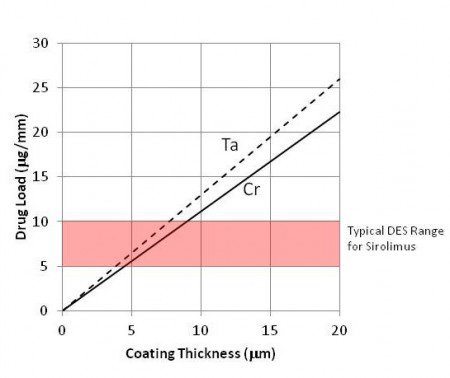 Figure 2  Drug load capability for a cardiovascular stent.  Solid line is for tantalum and the dashed line is for chromium.

The release rate of drug from the nanopores is governed by both dissolution and desorption.  For drug molecules more than a few monolayers away the surface of the coating columns the release rate depends primarily on the dissolution of the solid drug.  For molecules closer to the drug-porous coating interface, the release rate is determined by desorption.  Figure 3 describes the overall drug release process.  Although dissolution is a relatively fast process, measurements of the desorption rates of drug from surfaces show that this process offers the potential to deliver drugs over days and even weeks.  This longer release timeframe is often needed to provide the necessary therapeutic treatment. 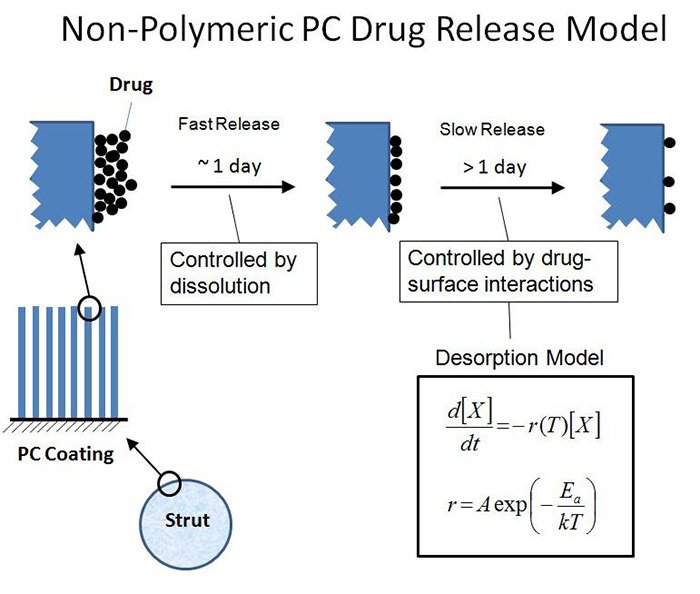 Figure 3  Drug release from a surface.

One of the most important features of the Isoflux porous columnar coatings for the purpose of drug delivery is the fact that these coatings have an enormous amount of surface area.  Figure 4 shows the increase in surface area as a function of coating thickness for both tantalum and chromium. 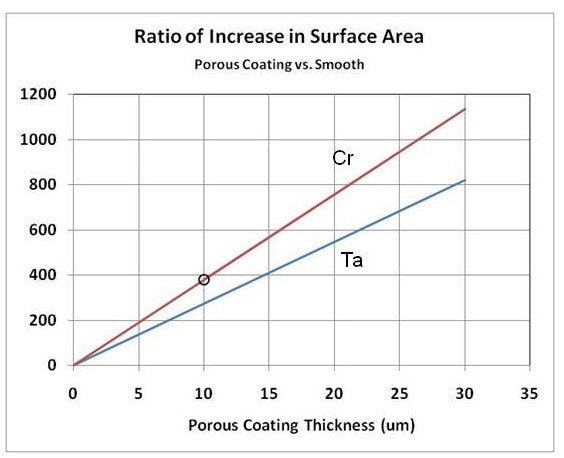 Only because of the large increase in surface area is it possible to rely on the relatively slow desorption process to provide long term controlled release of medically significant amounts of drug.  For example, a monolayer of drug on a stent that has been coated with 20 microns of porous tantalum would contain 550 times more drug than a monolayer of drug on the original (non-coated) stent.   In other words, porous columnar coatings make it possible to completely avoid harmful polymer coatings when delivering drugs from implanted medical devices for extended periods of time.

For a more detailed history of drug eluting stents and the benefits of the Isoflux approach see Motivation for a Polymer-Free Approach, Isoflux BioInterface 2010 Presentation and Poster.